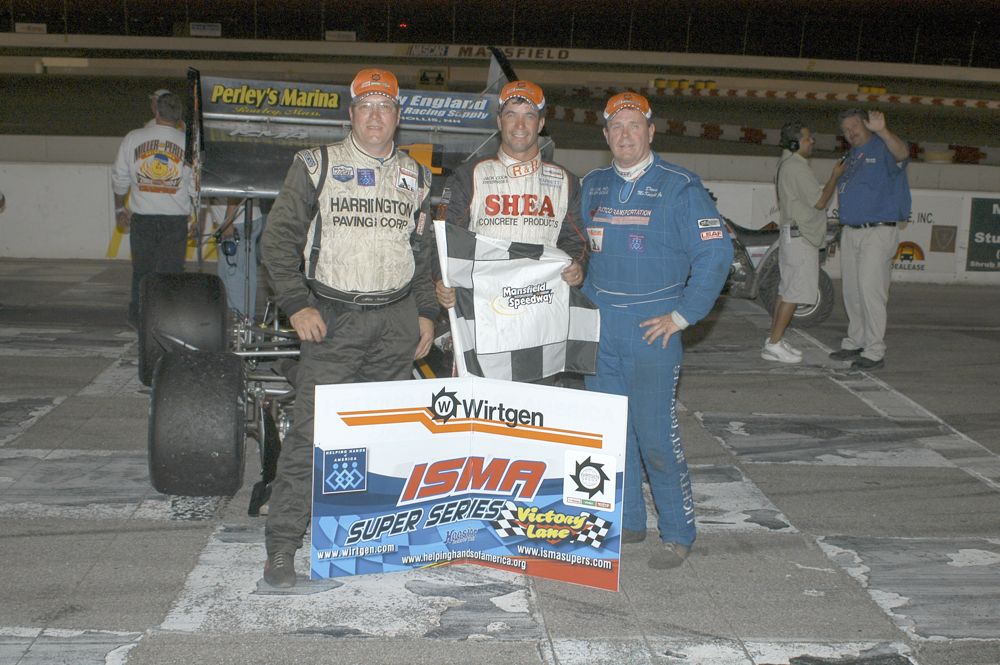 Mansfield, OH – Some days things just go your way no matter what happens. Chris Perley is having a lot of those days this year. After losing the Friday night feature at Mansfield Motorsports Speedway, the Vic Miller crew spent the day going over the car, welding some glitches they found, then changing some things to make the car just a tick better. Whatever they did worked just fine. And despite an ignition wire not fully plugged that shut the car off momentarily several times during the 75-lap feature Saturday night and a couple minor run-ins with a couple cars, things just came up roses for Perley. When things are going your way, they go all the way. Perley survived an intense battle with Dave McKnight and ended up on the front side of several lead swaps at the race end to win his eighth feature of the ISMA-Wirtgen season.

Said Perley after his fourth Mansfield win in five races at that Ohio oval, ‘That was awesome racing…awesome racing with everybody I raced with tonight. The lap traffic was really tough and Dave was running the perfect groove. I didn’t think I’d ever get by him. But, I figured if I stayed tight and I saw an opening we could both shoot through. We came up on a bunch of lap cars. He got through and I didn’t. Then the bottom opened up and I took the lead. I didn’t think I’d hold onto it. The right rear looked better in the heat today than it did yesterday. We just figured the pace would be a little slower at the beginning and it was for a while. Dave was running hard out there and at lap fifty I didn’t know who was going to lose their tires first because we were both pushing really hard. It was great racing tonight. It was great for the Miller team to bring home another victory. I can’t believe it. It’s just amazing. What a season. But, I’ll tell you it wouldn’t be worth it without the fans up there cheering me on. It’s just great racing here in Ohio. You guys are a great bunch and fun at night after the races too!

McKnight, who took the lead from Mike Ordway on lap 18, had this to say after his close loss to Perley.” The Stage Door, 401 Transport, Patco number 94 was good tonight. We’ve been picking up little by little. Chris has been awesome this year. My hat’s off to him. I think we had the car to win tonight. The traffic definitely played a part. Sometimes it’s better to be second than to be leading. The guys did a great job tonight. We’ve been working hard to get this car back. I think we’re slowly getting on track and we’re catching up. So we’ll see what happens when we go to Lee. It would have been nice to win but you know it’s not over until the checkered falls. Scotty moved over there on that last caution and let me go but Chris and my cars were pretty much equal tonight and it was whoever was in the lead at the end who was going to win. Once he got out in front we didn’t have anything to catch him. “

In a repeat performance, Mike Ordway was once again in third at race end after losing the lead to McKnight who lost it to Perley. The Fremont, NH driver was equally pleased with his second podium finish in two days. “We’re getting closer. Not bad for a rookie huh? We have some more work to do and we’ll keep plugging away at it. We’re getting there with a whole new car compared to what we had last year. Clyde and I are both happy.”

The thirty-three supermodified pilots, crews, family and friends tried to put aside the passing of the 21-year old sprint car driver, Joey Rebman, who lost his life after Friday night’s hard hit into the fourth turn wall. It wasn’t easy, but things continued. The three ISMA qualifiers were won by Dave Shullick Jr., John Torrese and Dave McKnight with Dave Trytek coming home with the 15-car consi.

Torrese jumped to the early lead of the 75-circuit main only to fall victim to Ordway’s onslaught on lap 14. But Ordway was not out front long before second place runner McKnight came by out on the backstretch.

A yellow bunched the field after it flew for Larry Lehnert. Joe Petro Jr. made a hasty pit on the caution, joining Dave Shullick Jr. who was already pitside. Petro, unlike Shullick, was restarted.

Ordway stuck with McKnight on the restart as Perley was making his way to fourth behind Mike Lichty. Torrese was fifth with Moe Lilje, Fornoro and Lou Cicconi close behind.

Yellow flew again on Lap 23 when the 40 of Bob Magner had to be pushed in to the pits. Rick Wentworth came in here too as did Larry Lehnert again. Magner restarted but another quick yellow for Rich Reid stopped the action once more.

When the restart stuck, Ordway pressured McKnight for the top spot as Perley and Lichty fought for third. Perley finally won the spot on lap 26. Out front, McKnight was dogged by not only Ordway, but also Perley, as Lichty, Friday night’s winner Cicconi and Fornoro were top six.

The fight for first was classic as Ordway was trying McKnight high and low. In the meantime Perley closed the gap as he watched the duo just in front of him. On lap 29 he took over second from Ordway coming off turn four. Another battle began for first.

Dave McKnight did everything in his power to hold off Perley as the to wove through the heavy y traffic leaving Ordway, Lichty, Cicconi and Fornoro behind.

With twenty-five to go the crowd was on the edge of their seats watching the pair slide around lap cars as Perley tried to find a block to get by McKnight, the only other ISMA driver to win at Mansfield besides Cicconi on Friday, since the start of the series there in 2004.

Finally on lap 55, Perley found his chance as the pair came around Robbie Summers in the Lane 97. But it wasn’t an easy trail to the finish. Heavy traffic and a yellow gave McKnight ample opportunity to retake the lead and he used every chance.

The final yellow came on lap 71 as Chris had put some cars in between his 11 and McKnight’s 94. Mike Lichty was the cause of the flag as the 84 came to a stop. Motor and or fuel problems were the cause. He did, however, restart to finish the race.

Out front on the restart Perley had the lap car of Martel between them for an instant, but Martel, a lap car, gave way to McKnight to allow one more chase but Perley held on this time for his eighth win of the season and his fourth at Mansfield. McKnight stayed second as Ordway, Fornoro and Cicconi completed the top five.

Fornoro said after the exciting event, “It was a good run. Danny made a lot of changes and made the car a whole lot better. We’ve got something to work with. I thought we had third but things got a little big tight at the line there. Lap traffic was a little tough and it was hard to get by some of the guys But I had the same advantage or disadvantage as anyone else had. It was a safe race and no one got hurt. Congratulates to Chris and his team. Also to Dave for getting second. We got fourth and it was fun. It was a great weekend. I’m still a little upset about last night but you know that’s racing and I just love racing with ISMA.”

Cicconi, however, was not pleased with his run. Lou said simply, “It was terrible out there tonight. The lap cars were the worst. I’ve never seen anything like it. The race director and me are going to have a little discussion when I see him.”

Justin Belfiore, Robbie Summers, Moe Lilje, John Torrese and Martel were the top ten. Belfiore was the last car in the lead lap in sixth.