CHRIS PERLEY FINALLY GETS HIS OHIO WIN AT MANSFIELD 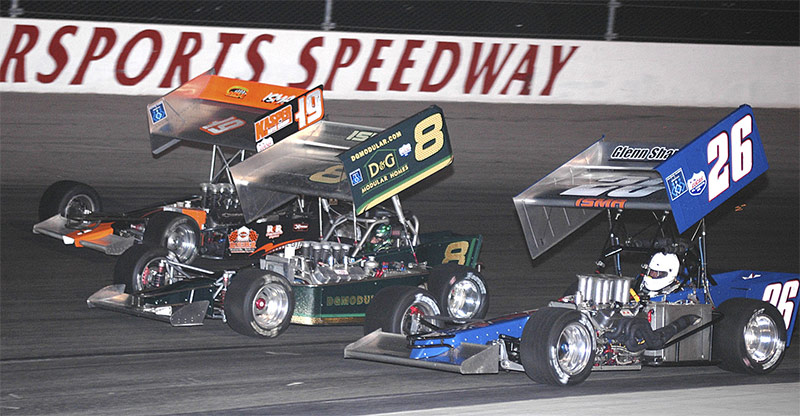 Mansfield, OH – Chris Perley, after a heart-breaking loss at Sandusky’s Hy-Miler, said just prior to the ISMA 40-lapper Friday night that he’d like to just win one race in Ohio. He’s had his chances and fate steps in and takes that elusive checkered away. Friday night at Mansfield Motorsports Speedway, Chris won his heat and due to some bad finishes of late, sat on the second row inside for the start of the ISMA 40. In one lap he stormed by Joe Petro and took off with victory on his mind. A quick yellow on lap 4 for the Magner 35 slowed his progress, but only temporarily. On the green he stormed away once more and for the 36 green laps remaining, he staved off any challengers by tucking in lap cars behind him. He was ecstatic with his win and made it evident in victory lane.

“I can’t believe we won one in Ohio. Obviously we finally ran good at Sandusky a couple weeks ago and had it taken away. We don’t give up though. We have a good car. Unfortunately we had a good starting spot tonight because of all our bad finishes and I took advantage of it. I got to the front quickly and just ran away. In a 40 lapper you can run away. “

“Tomorrow is going to be different. I think we can hopefully carry this momentum into tomorrow and do what Dave McKnight did last year and try and sweep it. I have to do something with Pat (Abold) because he’s just beating us up out there. If I can just stay ahead of him, that will be a good day. At the end of the race, I hit a bunch of lap cars, but my crew told me I had a cushion and I didn’t have to dive into that pack. Diving into that might have been hazardous. I was happy to see that long green span and the lap cars behind me. Right now I needed to win one anyway I could.”

Current point leader Pat Abold did all he could to take the check out of Perley’s check-out, but never could get close enough in the fast sprint. “This is a fast track. It’s a little difficult to pass on because it is so fast and it’s a little bit narrow up there. But, it’s a fun place to race. There is no track anywhere that’s as fun as this one. We had a good car tonight. We were just a little bit free getting in. Chris checked out there at the end and we just settled into second because I knew we just had to finish here tonight and get on to tomorrow’s race. Tomorrow will be a different race. It’s 100 laps. Tonight was a sprint. We’ll have to setup and drive a little bit more conservatively to have a car for the last 25 laps.”

Third place finisher and defending race champion Dave McKnight was just happy to finish after he and the crew spent the afternoon changing a motor. “It was a trying day. The Patco-Lucas team did a great job. We struggled today. We had no practice. We had to change a motor and to come back with a third, we’ll take it and go on to tomorrow.”

With Perley taking the lead almost from the git go, it was Joe Petro who tried to keep up with him while Jon McKennedy, McKnight, Scott Martel, Mike Lichty and Charlie Schultz chased behind.

After the lap four yellow during which Lichty pitted for an errant wing, Bobby Haynes Jr. and Bob Magner also went pitside, the green dropped with no other stops along the way. Petro tailed Perley until Dave McKnight got by Joe on lap 10. The battle behind for the next spots was nothing short of amazing as Russ Wood, Pat Abold, Jon McKennedy, Nokie Fornoro and Justin Belfiore swapped positions back and forth at breath-taking speeds.

By lap 18, Pat Abold took over second while Perley cruised out front. A couple lap cars separated his 26 from Perley’s 11 while McKnight, Petro, McKennedy, Martel, Wood, Fornoro and Belfiore raced past the halfway mark, darting in and out of traffic, trading spots as they moved around the quick high banks.

With ten to go, Perley now had a three-car cushion over Abold with McKnight separated by one or two from Pat. The battle for fourth on back was as torrid as ever as the winged supers tore around the track at breakneck speeds. As the checkered fell, Perley had his wish as Abold and McKnight finished in the top three. McKennedy and Fornoro completed the top five. McKennedy’s fourth was high for his season.

“The car was real good,” said the Chelmsford, Mass. driver. “Toward the end it was coming along. I think we’ll have a good set up for tomorrow. At the beginning I was a little loose, but toward the end it was getting really good. I’d like to thank all my sponsors and my crew. This is my best finish of the year and I hope we can get it tomorrow.”

The ever-animated Fornoro commented on his run and his battle with his fellow drivers. “It was a fun night other than the car being really hot temperature-wise. It was running about 240-250. No excuses. I felt we did have a good run. It was a tough race and I’d like to congratulate everybody that finished. I think it was a very safe race. We’ll see how things pan out tomorrow.”

The remainder of the top ten were Petro, Wood, Belfiore, Sammut and Randy Ritskes.

No consi run. Promoter elected to start all cars. Smith could not start after heat wreck. Payne switched to drive the 92 after blown motor on his 4 car.