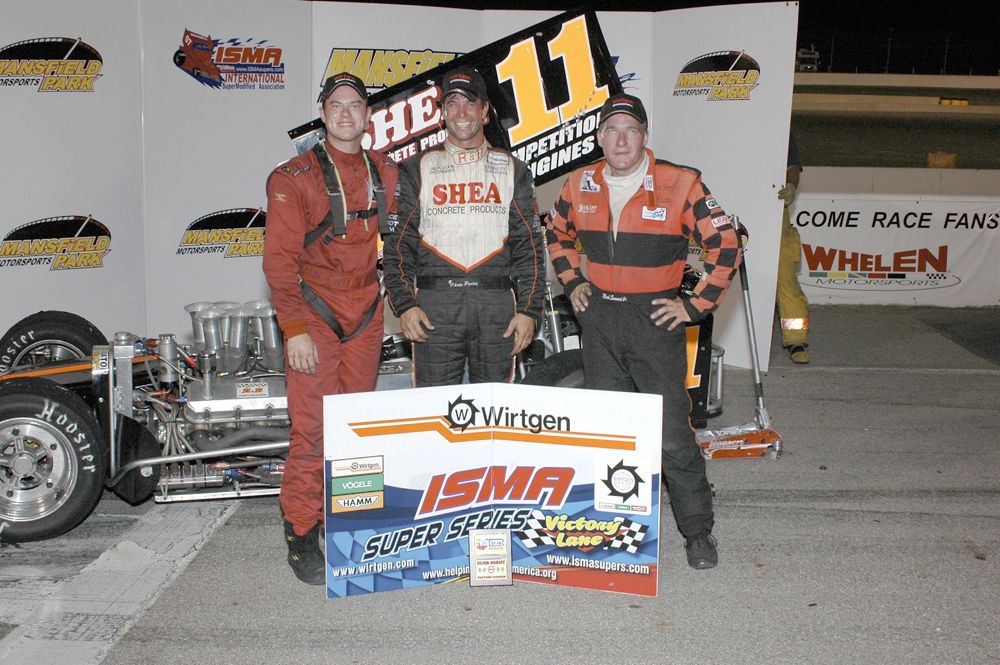 Mansfield, OH – Chris Perley said Friday night at Mansfield that he’d run out of luck after a minor wreck on lap six put him out of the 40-lap ISMA-Wirtgen event. But, he added kidding, that he had a new bucket of luck in the trailer, unopened. Saturday night he put that new batch of luck to good use as he stood in victory lane next to a hissing rear tire, which would go flat moments after his post-race interview. A lap or two more and he would not have been there. But, that’s the way things have been going this year – and last, for Perley and the Vic Miller team. Perley’s seventh win of the season puts him two races away from taking over the ISMA all-time feature win list from Pelham, NH’s Russ Wood.

Said Perley, “We just opened that new bucket of good luck because I don’t know if you can hear it, but my tire has a big hole in it. So we pulled this one off tonight. We got lucky. The car was just awesome. Last night was a bit of a disappointment but we just come back and try to do the best we can the next day. And the crew said ‘we’re going to give you a car tonight that will get the job done’ and boy did they because this thing was on a rail.

“I’ll tell you I never thought I’d be here – to be in the company of Russ Wood and Bentley and those guys in all-time wins. It’s just awesome. I’m just so lucky to be with this team. They work so hard and I can’t say enough for them. Vic Miller is the best car owner in the world. Don’t tell him I said that because it will go to his head. I have awesome motors built by R&R Automotive and I have great sponsors in Ed Shea and in Perley’s Marina, New England Motor Racing Supply, KidsFirstUSA and I want to thank all the fans for coming out and watching us. I hope we put on a good show tonight.”

Perley took the lead from Canadian Mark Sammut on a lap 32 restart, slipping under the 78 to lead on lap 33. Trying hard to stay out front eventually cost Sammut his second place when Ohio’s Charlie Schultz grabbed the spot with less than five laps to go. Charlie, driving the May Motorsports 7, was ecstatic with second. . “We weren’t real good last night. When I got here this afternoon I made some changes in the car. We still weren’t real good. Then I tried something kind of spur of the moment before the last hot lap session and then the car was like three times faster. I thought we might be on to something here. The car was really raceable all night. It was good enough to come up second. Chris got through some of the lap cars better than I did. They said Chris had a tire going down and if the race had been 100 laps it might have been somebody else different in victory lane. I just want to thank my sponsors, Dave and Lori May, my mom and dad, my entire crew, Performance Race Fuels, Hempel Transport, Burke’s Home Center, DEI – everybody who works on this car. I’d also like to thank Lou Cicconi. He came down and helped us out too. It ended up being a pretty good day.”

Sammut, still yearning for that first win, settled in for third and a podium finish. He had to run the wheels off his car to even hope for that first one. “Starting where I started I had no choice but to go right off the start. I held it down for everything it had and maybe that was a mistake. By the end I was out of tires and just hanging on. It probably cost us second. We fought the car all weekend and this was definitely the best the car has been. We’ll take third place anytime running ISMA. We’ll just keep plugging and doing what we need to do. Maybe one of these days things will go our way and that first win will come.”

After time trials and the first heat was run, won by Dave McKnight, a horrendous crash occurred in the second heat, which caused hearts to stop and some anxious moments. While Robbie Summers led out front, a crash involving Johnny Torrese and Vern Romanoski stopped the action and saw Torrese airlifted to a local hospital. On lap 9, the 91 apparently lost a wheel nut, which caused the spline to break. Torrese, coming into turn three, caught Romanoski, spun around and slammed hard into the soft walls pretty much destroying the 91. Torrese was being x-rayed for a possible broken shoulder at press time, but otherwise had escaped serious injury.

Racing resumed with Bob Dawson beating out Perley for the third heat win.

The 23-car field was led immediately from the green by Sammut who started outside front row. Sammut knew he had to get out as fast and as far as he could. He did just that. By lap 15 he was well out front of Kelly Miller, Schultz, Perley, John Blewett and Dave McKnight. On lap 17, his efforts were negated as yellow flew for the 24 of Dave Sanborn who had a flat tire and was towed to the pits.

On the restart, Schultz and Perley fought by Miller for second and third as Sammut once again tried to flee. Behind that trio, Mike Ordway Jr., McKnight and Blewett were furiously swapping spots. One lap later, Perley was by Schultz and tucked up behind Sammut, but Sammut was not giving up easily.

The 78 held off the 11 until a lap 33 yellow, which saw the 16 of Miller, go up in smoke as he headed into the pits. A couple lap cars now sat between first and second while McKnight, Blewett, Ordway, Bob Dawson, Jeff Holbrook, Mike Lichty, Ray Graham Jr. and Robbie Summers were still fighting for top ten spots.

This restart was Sammut’s demise as Perley got along side and rode next to Sammut for half a lap before taking over the lead on lap 33. In a scene repeated six other times this season, it was bye, bye Perley. Sammut, Schultz, McKnight, Blewett and Ordway, however, were putting on one heck of a show well behind as the laps ticked away.

The flap fifty mark had the order behind Perley showing Sammut, Schultz, McKnight and now Ordway, Blewett, as the youngster battled with one of the modified world’s best for the second straight night. Ordway Jr. was the one to watch as he put away McKnight on lap 65 as McKnight’s car began to have its fuel problem once again. With less than ten to go it was Perley, several lap cars, then Sammut, Schultz, Ordway, McKnight and Blewett.

With five to go, Schultz had used traffic to move past Sammut and Blewett had moved into fifth past McKnight. And, that’s the way they passed under the checkered with Perley’s tire hissing as he pulled into victory lane with Schultz and Sammut parking nearby.

Second-generation driver Mikey Ordway had another fine run, holding off Blewett. “We were joking around all day that John and I were going to get stuck with each other again. He’s just a great driver. He ran me clean both nights. Louie helped me out a ton this weekend. John was helping me out – he’s great with the chassis stuff. I have to thank Lee Vinal Excavating, Harrington Trucking and Harrington Paving, Glenn Shanks Oil, my dad, Ricky Wentworth, Vic Miller and all those guys, because they helped me out a ton again. The car was good. The car came on great at the end. I told Perley’s guys if it had been a 100 laps, I would have passed him too. It’s just unbelievable. Hopefully we can go home to Lee and run good there.”

And, Blewett, in only his second supermodified run ever, was all smiles after finishing a strong fifth. “I just have to thank the Cicconi’s. I had a really great time. The guys worked their tail off trying to get the car where we thought it needed to be. It was an opportunity for me to come out and do something different from what I usually do. It was fun. This is a great group of guys – a great organization. I don’t race much with no radios and no mirrors. I think a lot of series could take a page off of this series where the guys drive with a lot more respect than we have on say the Whelen Tour and even the weekly series. I see radio driving a lot. I didn’t know who was around me or behind me when I was running. I was cautious and listening for guys coming around me. It’s nice when you’re running with guys who are racing hard, but clean. Like I said, I have to thank the Cicconi family for having me come out here. The closest thing to a super I’ve raced are the modifieds we ran at Flemington. We had a lot of horsepower there. I’ve never driven anything with a wing before. It’s similar to the midget I ran at Atlantic City for Lou but that track is small and tight and you can’t use the horsepower. This is definitely not like anything I’ve ever driven before.”

McKnight, Mike Lichty who had indicated they’d missed the setup on his 84 that night, Summers, Bobby Dawson and Jeff Holbrook, rounded out the top ten.

Notes… Bob Magner sat out Saturday night’s event after Friday night’s wreck left him extremely sore…Vern Romanoski tried in vain to make the feature after his heat race incident that also involved Torrese… Viewers likened the damage to Torrese’s 91 to his car owner, Ray Graham’s bad accident at Oswego earlier this year….Kelly Miller discovered a cracked axle on the 16 prior to the feature with hasty repairs made….A piece of aluminum was found in Perley’s tire after the race….Larry Lehnert’s 92 had overheating problems after that team had managed to work all night to get a second car back in competition after Friday’s wreck…The Lane team spent a long night on spindle-rack and pinion repair to get Robbie Summers back into the fray on Saturday… Gene Lee Gibson reported that his 0 was damaged beyond repair on Friday and may not be out the rest of the year…