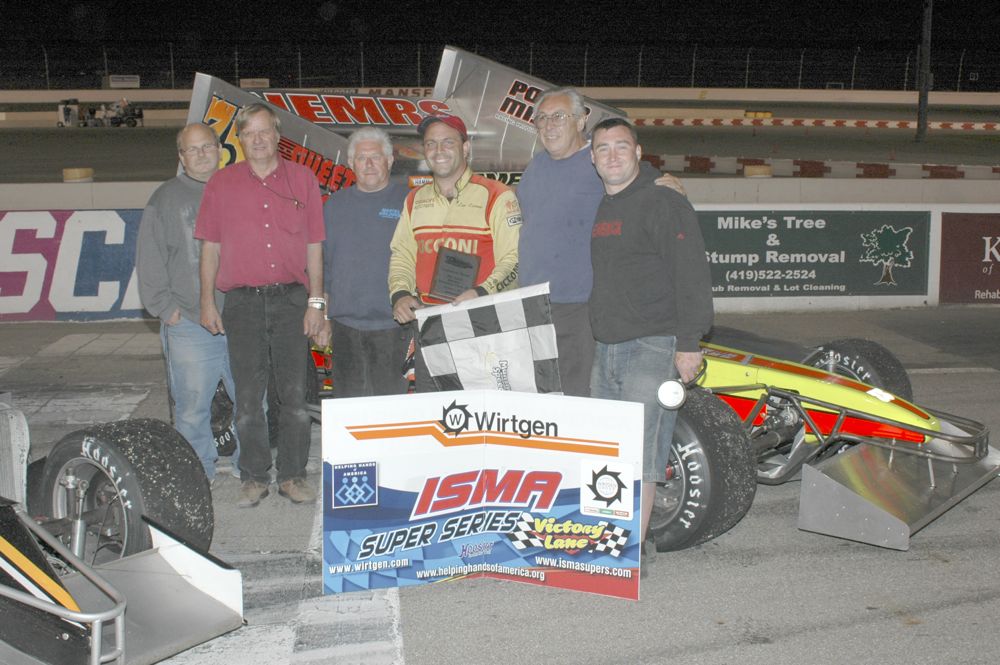 Mansfield, OH – Chris Perley’s dominating win-streak on the Wirtgen-ISMA circuit came to an end Friday night when Lou Cicconi took his first of the season. But Perley rather expected the short-40 lap main would be tough. There was more than one hotshoe starting in front of him and they were all gunning for a chance to beat him. Cicconi made some great moves in traffic, with shades of his indoor midget run showing, to take the lead from an equally strong Mike Ordway on lap 20 while Perley was still mired in sixth. “The Rowley Rocket” was able to make a few spectacular moves in traffic himself to get behind Lou but time ran out on the only-one caution race. Lou, who picked up a guaranteed spot in the upcoming 50th anniversary Bud Classic at Oswego, was all smiles in victory lane. It was his kind of race.

Said the Aston, PA driver, “It was a good race… awesome. I knew in the last five I saw Perley going up and I knew it was going to be tight. Traffic was the key. I thought I was back in Atlantic City. It got me through it. It was good. I’d rather have a race like this. It’s more fun.”

Perley, despite the end of his win streak, echoed Lou’s sentiments. “I needed a 42-lapper, Chris laughed. “I figured Cicconi or Ordway or somebody would pull one off tonight. Forty laps and everybody starting up front like that was just too much for me. The car wasn’t as good in the first half but it got better. We did come up and make it a race toward the end. It was fun.”

The happiest guy on the podium was Mike Ordway who has had his share of bad luck this season. “Well we finished the race and in the top three. It’s a good start. We’ll take it. We’ll just keep working away and we’ll get there.”

A strong field of 35 winged super marvels filled the Mansfield pits for the first of a doubleheader weekend at the banked half-mile Ohio oval. Four heats and two consis pared the field to 25 with Ray Graham Jr. and Mike Ordway on the front row. The night was marred by a devastating HOSS sprint accident, which shortened that 30-lapper and cast a pall over the crowd who witnessed the horrific hit.

After a long delay, it was Ordway out front from the get-go and the Fremont, NH native quickly put Graham, Bob Magner, Kyle Carpenter, Nokie Fornoro, and more behind him. By lap 8 he was lapping the tail of the field. Ray Graham Jr., Magner, Mark Sammut, Carpenter, Cicconi, Fornoro, Shullick Jr. and more still raced rapidly behind and it was the only yellow of the race on lap 13 that slowed the pace.

The flag flew when Mark Sammut and Bob Magner made contact with Sammut ending up half on top of Magner. Sammut’s 78 was removed from the 40 and was able to continue. Magner had some damage from Sammut’s tires, especially to the oil tank, which caused him to go pitside. Also in the pits here were Bellinger, Lichty, Belfiore, Burch and Shullick Jr. Shullick and Burch did not continue.

On this restart Cicconi made some breath-taking moves around traffic on the outside to take over second. Fornoro was now third as Carpenter challenged. Graham and Dave McKnight Jr. were next up as Perley was still in back of Graham. Bobby Santos was also on the move as the race approached a quick halfway.

On lap 20, Cicconi made his move by Ordway on the backstretch to lead lap 21. “Liquid Lou” was hooked as he moved away from Ordway, Fornoro, Santos, McKnight and Perley.

Lou began his traffic moves as the race approached ten to go but Ordway, Fornoro, Santos, Perley and McKnight followed the fluorescent 75 doing some magnificent maneuvering themselves to keep Lou in sight.

Perley was into third on lap 31 moving by Santos and Fornoro in one swoop as the crowd went wild. On lap 34 he took over second from Ordway in another swoop and set out for Cicconi. But, the race was too short this time and Lou was too hard to catch. On lap 39, a mass of traffic held up Cicconi just long enough for Perley to close up the gap, but the end was one lap away and Lou took the checkered first. Perley, who had won the last three-straight Mansfield shows, settled for second with Ordway McKnight and Santos in the top five.

Santos, who was preparing to head for a USAC run at Salem, IN, commented, “It was another good race. We had a lot of fun. We needed more laps at the end there and I think we might have had another spot. We needed that 42 laps also. But, it was fun.”

McKnight enjoyed his fourth place run. “Eleventh to fourth – what can I say? The Patco Transportation, 401 Trailers, Stage Door Transportation 94 had a good run tonight. We’re picking away at it. We ran strong coming up from eleventh. The car was getting better as the race wore on. I think tomorrow night should be better for us. We’re catching up. Chris worked a little harder and didn’t win tonight. I think everybody’s picked up the pace a little. I’m really excited about Saturday night and I’m really happy about the program right now. The guys put in a lot of work on the car today. It was a great effort. “

Notes… In pre-race ceremonies, the ISMA group and sponsor Wirtgen presented Make-A-Wish of Central Ohio with a $2000 check in honor of 8-year old Benjamin whose love of racing brought him to watch the supers and sprints on Friday night. Many gifts gathered by the ISMA drivers and crews and a ride around the track in a stock car brought a big smile to the cancer-ridden boy and his family…Racing at Mansfield continues Saturday night with an ISMA 75-lap main.