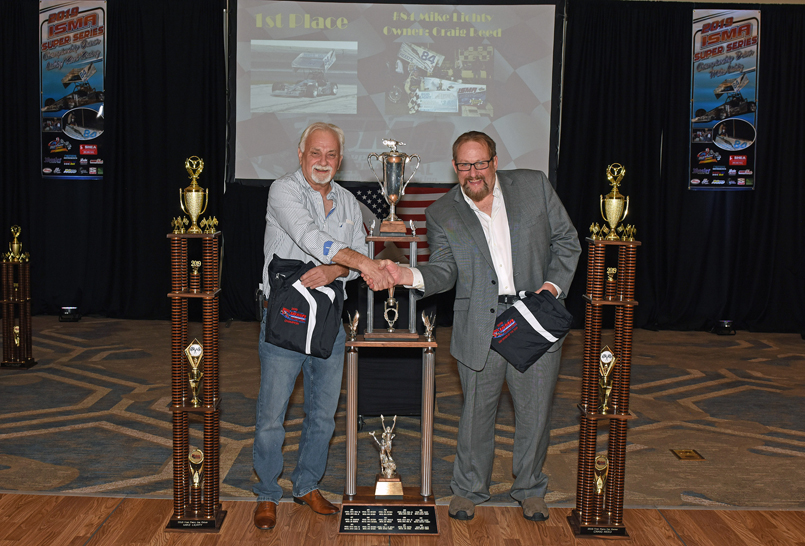 Syracuse, NY – The Embassy Suites by Hilton, in Syracuse, NY provided the backdrop for the annual ISMA awards banquet. The event honored many for their achievements during the season. MC Kathy Harrington, who developed the Driver Point Fund over ten years ago, did the honors introducing the numerous awards.

Several raffles were up for grabs from the top 15 car owners in attendance. First up was a radiator donated by BS&B Rads of Canada. Lane Racing was winner. The NEMRS Nose Wing prize sponsored by H&S Prototype and Design went to the Lane Racing 9. Three $100 gift certificates donated by New England Motor Racing Supply went to Doug Edwards (1E), Steve Stout (19) and Steve Stout(49). A helmet prize donated by Seymour Racing Performance, was awarded to a top 15 driver on hand. Ben Seitz, driver of the 32, took home the prize.

Special Recognition Awards, as voted on by the ISMA membership, began with the presentation of the Randy Witkum Memorial Rookie of the Year award which quite appropriately went to Jeffrey Battle, who, in his first year of ISMA racing, had several memorable top finishes. Jeffrey is the son of Sheri Witkum and nephew to Eddie, Randy and Richard Witkum.

The ISMA Crew of the Year award sponsored by Bob Hilbert Sportswear, went to the Lichty-Reed championship team. All provided with jackets.

The Mechanic of the Year award, sponsored by Lane Tire Sales, went to the chief mechanic Rich Witkum on the Lane 97 and 9 cars for his outstanding efforts in maintaining both top ten finishing cars. Rich received a jacket and $500.

The ISMA Up and Coming Driver winner award, sponsored by Slice n Go Deli, is presented to the driver who demonstrated rapid development throughout the season, with a promising future in the sport. Jeffrey Battle, quite deservedly, took home this award also. He was presented a jacket and $200.

A new award was introduced in 2019 with the Delores Murphy Woman of the Year Award, to go to someone who shows commitment and dedication to the organization. The award went to Deb Forgie, ISMA treasurer, and all around hard worker on all front. She received a fleece jacket.

The ISMA Jim Soule Dedication award is presented to a member who emulates the concern, dedication and generosity that the late car owner displayed throughout his years of racing. Car owner Howie Lane was the winner of this coveted award. 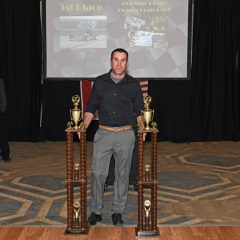 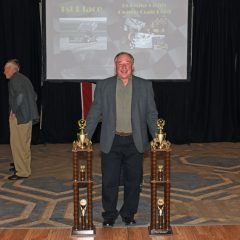 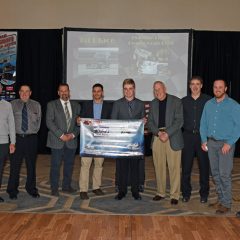 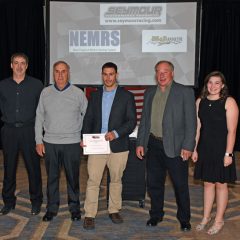 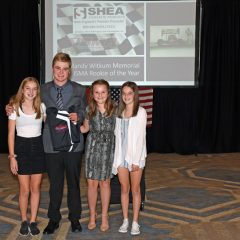 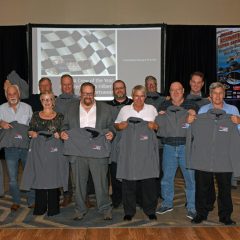 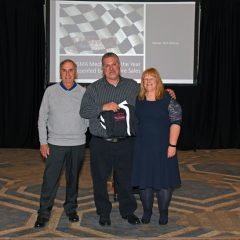 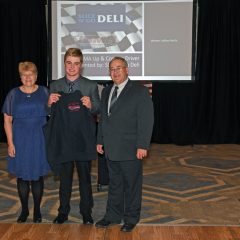 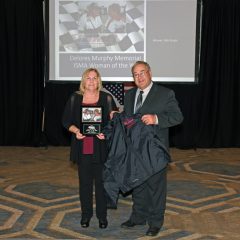 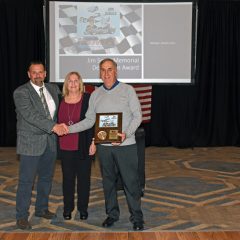 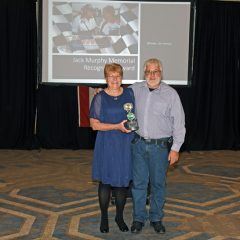 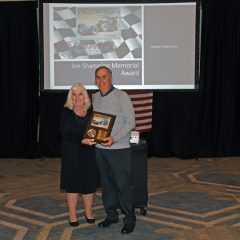 The Jack Murphy Memorial Recognition award is presented to an official or employee who has the same dedication, work ethic and professional attitude helping ISMA throughout the year. This award went to photographer Jim Feeney who has spent over three decades providing helping out and providing photos to news media, websites and more over his time behind the camera.

And finally, the prestigious Jim Shampine Award which is given to a member, official or volunteer who shows the same goals the late ISMA founder had for the organization. Howie Lane, who takes over the helm of ISMA in 2020, was presented this honor.

Throughout the evening many of ISMA’s loyal sponsors, including Corr/Pak, Hoosier Tire and Shea Concrete Products were thanked along with a long list of volunteers, race day sponsors, yearbook staff, Star Classic lap sponsors, and door prize contributors.

Entertainment was provided by Mystic Music and video-slide presentations were orchestrated by Steve Quonce.

A Board of Director’s Meeting and General Membership Meeting was held earlier in the day with some rule changes proposed and a 2020 schedule in the works, highlighting the discussions.