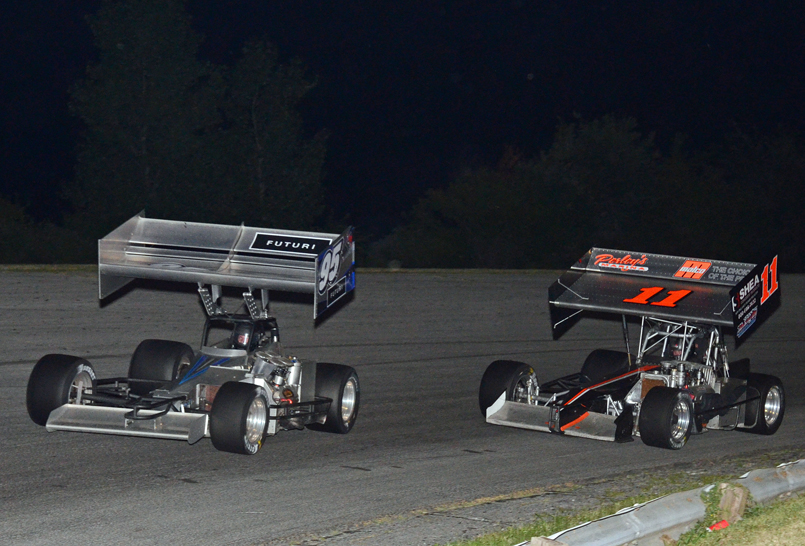 The 2019 edition of the Hy-Miler marks the thirty eighth consecutive year that the ISMA Supers have competed in a two day double header on the ultra fast half mile oval located one hour west of Cleveland.

An impressive field, made up of six former Hy-Miler winners, is expected for the ‘Dusky double including Dave McKnight, Mark Sammut, Tim Jedrzejek, Mike Ordway Jr, Jon McKennedy and defending champion Dave Shullick Jr, who will be piloting the all new ACME Racing No. 49.

Lichty Racing will again bring two cars to the Hy-Miler, driven by Mike Lichty and Moe Lilje. The duo have won one ‘Fast Forty’ event each, but have never been able to find victory lane come Saturday evening.

Ben Seitz, another Fast Forty winner, will also be searching for his first Hy-Miler checkers with the potent No. 32 for Dan Soule. Soule Racing won back to back Hy-Milers with Tim Jedrzejek at the wheel in 2011 and 2012.

Joining some of ISMA’s finest will be a healthy contingent of Midwest competitors such as Jim Paller, Kyle Edwards, Larry Lehnert, Ricky Otts, Rich Reid, Jake Smith, MIke McVetta, Danny Shirey, AJ Leseicki, and Talon Stephens, who have all put the Hy-Miler on their schedules.

A trio of Oswego Speedway drivers are set to make the trip out as well, including eight time champion Otto Sitterly, who will look for his first Hy-Miler with John Nicotra’s No. 7. Joining Sitterly will be 2018 rookie of the year Tyler Thompson and former series winner Mike Muldoon.

One year removed from his tremendous drive from fourteenth to challenge for the race win in Hy-Miler 41, Oswego track champion Michael Barnes will also be back in the Vic Miller No. 11, vying for his first ever checkered flag with a winged Supermodified.

For the Sandusky Hy-Miler Nationals, ISMA handicapping will not be used. Heats will be set based on top twelve in time trials for each program. Drivers must be within one second of the fourth fastest car in practice in order to claim rightful starting position.

In both the Fast Forty and the Hy Miler, the top four from each heat will draw a pill number for starting position. The remainder of the field will be lined up behind the top twelve according to heat race finish.

Pit gates will open at 2pm on Friday afternoon, with grandstands and practice at 4pm and time trials at 6:30pm. Qualifying racing will take the green flag at 7:30pm. Grandstand tickets are $25 for adults, $23 for seniors, $8 for kids six to twelve, and children five and under are free.

For the Saturday finale, pits will open at 11am, grandstands and practice are at 1pm, time trials at 4pm, and racing at 7pm. Grandstand pricing will be $28 for adults, $26 for seniors, $8 for kids six to twelve, and children five and under will again be admitted without charge.

Fans planning to attend both days of the Hy-Miler will have the opportunity to purchase a two day pit pass through Sandusky Speedway for $75. Further information on the Hy-Miler Weekend can be found at SanduskySpeedway.com.

About the International Supermodified Association: ISMA was founded in 1974 by multi-time Oswego Speedway champions Jim Shampine and Nolan Swift to ensure the future and longevity of Supermodified racing. Powered by their earth shaking 900 horsepower engines, the winged Supermodified is one of the fastest short track race cars in the world capable of reaching speeds up to 160mph. Through 45 seasons of operation, ISMA continues to be one of the most popular, well recognized touring series in short track racing. The organization has eleven events scheduled at nine different facilities this season that include stops in New York, New Hampshire, Ohio, Connecticut, and Ontario.